The rapid growth of digital development in Africa has made the continent a hub for investments and a target for cybercriminals.

This article gives a general account of Africa’s cyber security performance and suggestions on areas of improvement.

How to measure a country's level of cyber security

These are the three widely used metrics used to determine a country's cyber security status:

1. Level of participation of countries in cyber security initiatives

This metric focuses on how many times a state supports incentives concerning improving cyber security infrastructure.

Incident Response Time is the duration between when one reports an incident and when security personnel send the first response.

Refers to the frequency in which cybercrimes occur where data assets are compromised.

How is Africa doing so far?

Based on the National Cyber Security Index, these are the top 10 countries in the African region: 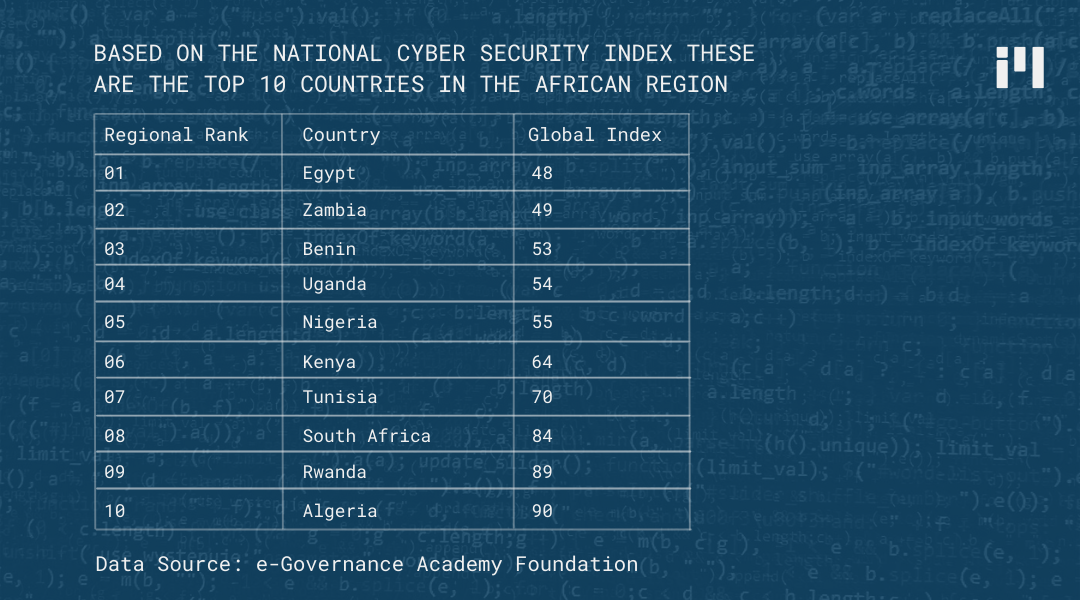 This performance indicates an urgent need for reforms in Africa's cyberspace.

How to improve the state of cybersecurity in African nations

1. Enforce IT security skills in the workforce and spread awareness to the public.

The greatest challenge in Africa is spreading information and understanding on cybersecurity, simply because most governments do not prioritize IT security on their agenda.

Training and awareness provide the first line of defence in the event of a cyber-attack.

Public-private partnership incentives need to be created in African countries to build their cyber capacities to tackle cyber threats since the private sector owns 95% of Africa's ICT infrastructure.

Most private small and medium enterprises (SMEs) in Africa that depend on internet connectivity and computers show low interest in making investments in cybersecurity, fearing financial strain.

For instance, some African businesses use pirated software since they believe it is cheaper, unaware of the dangers of such practices.

The public sector, through the government, could enforce piracy laws, conduct audits, and lower the value-added tax on such software products.

3. Imposing strict regulations on the use of surveillance technology

However, in recent years the technology has been manipulated to fit the selfish interests of the few at the cost of people’s privacy and freedom.

African governments are yet to establish fair laws and regulations on the use of surveillance technologies.

According to Covington, eight countries in Africa have well-established data protection laws. For a continent composed of 54 independent states, that is very concerning.

The implementation of a standard legislative framework could make it possible to punish criminals and regulate governance in cyberspace, for instance, the African Union (AU) established a convention on Cyber Security and Personal Data Protection.

The convention employs AU member states to set up institutions specialized in combating cyber-crime. However, the treaty is still under scrutiny.

Cyber security is an ever-changing landscape, if we do not act in urgency will continue to accrue losses.

Am a netizen, I keep an eye on new trends in the tech industry. I also leverage various technological tools, as a software engineer, to develop effective solutions to rapid challenges. It is tough but I love what I do.

Which technology is likely to shape Africa's business sector in the next 5 years?

When purchasing computing devices such as smart phones which factor do you consider?

This site uses cookies. By continuing to browse the site you are agreeing to our use of cookies Find out more here